Money is a legal institution and not a commodity, says Ron Paul (without meaning to do so) 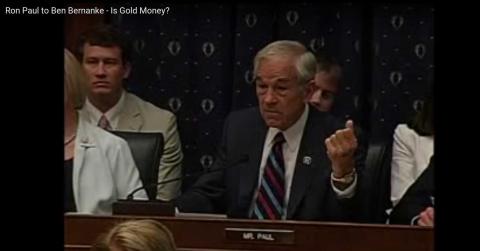 Do you think gold is money?

That was the million dollar question that Ron Paul dropped on Ben Bernanke on July 13, 2011, at the meeting of the U.S. House Financial Services Committee. The pathetic comeback of the chairman of the Fed made this one of the most celebrated one-two punches that libertarian "hard-money" advocates ever landed on statist "planners". Something like Dirty Harry's "Go ahead punk, make my day!" line.

But, much as Bernanke's reasoning was quasi non-existent, a mere rumination of economic platitudes ("gold is an asset") or pathetic comebacks (central banks hold money by "tradition"), his reply was actually correct.

I could cite endless historic facts drawn from the work of Alexander del Mar that refute that "6000 years-old law" (an early metallist himself, subsequently converted after starting his most serious historic research) or Georg F. Knapp's state theory of money. I could cite the empirical work of archaeologists, anthropologists and historians that refute that claim. But in the context of the present article it would be more amusing to cite none other than Dr. Paul himself.

A few months later, on February 29, 2012, at the meeting of the Committee on Financial Services, the tête-à-tête of the two men repeated itself. Now, even more theatrically, Dr. Paul produced a silver dollar, boasting to the effect that from 10 gallons of gasoline in 2006, that dollar could buy 11 gallons in 2012. And then he went on:

Money comes into effect in a natural way, not in an edict [sic] not by fiat, government declaring it is money.

So far, so good. The run-of-the-mill argument of Austrian-school economists, praxeologists, "hard-currency", "sound-money" advocates and the sort. Although historically unfounded, without one shred of empirical evidence supporting it, this argument has been a staple of this line of thought. It has served it well, as rarely people have the reflexes to scrutinize it, usually accepting it at face value.

But then, something surprising happenned. Dr. Paul started pleading:

RON PAUL: Why is it we can't consider, you know, the two of us, an option: you love paper money, I think money should be honest, constitutional, still-on-the-books, gold and silver, legal tender. Why don't we use it?
But why don't we allow currencies to run parallel? They do around the world. But what are my options?  [...] Why won't we legalize competing currencies? [...] We already have a silver eagle. It's legal tender for a dollar. And some people say "it's legal tender, it's a dollar, it's on the books", they use it and they get into big trouble. The government comes and closes them down. And you can get arrested for that.
But what would be wrong with talking about parallel currencies and competing currencies? This is something that Hayek talked about. Something that I think would be a compromise and we could work along those views.

BEN BERNANKE: [...] On alternative currencies: nobody prevents you from holding silver or gold if you want to. It's perflectly legal to do that. And it's also perfectly fine to hold other currencies, euros or yuan or whatever else. So in that respect you can do that and I would be perfectly happy to tallk to you about...

That's nothing near money when it's illegal to use it.

A hole starts appearing in the reasoning, as "natural" is conflated with "institutional"...

Interestingly though, Dr. Paul seems to have grasped the nature of money intuitively, even if he doesn't know it. "That's not money!" he exclaims, referring to gold and silver, because you can't use them to settle your lawsuit. It's as if he was citing Georg Friedrich Knapp's "The state theory of money": "it's nothing near money when it's illegal to use it".

Just as King Croesus is bellieved to be the first to have legally imposed gold as money, Dr. Paul is asking for the legal reinstatement of gold and silver, for yet another time in history. That's the only way he acknowledges that these could be money... in his own words.

Human societies are not so much organized through "natural" processes, but through institutional ones. And although human institutions may not defy nature, they can still choose between widely diverging paths within the rigid bounds of natural laws. They cannot outlaw gravity, but they can very well ordain what is to be money. Money is not a natural phenomenon, found in nature, but an institutional one developed in human societies. And the laws of these societies determine its nature, its functioning and its mechanisms.

Anything can become money, so long as it has a state's laws behind it. Cowry shells in some countries were money because laws said so. And even a physical object as cherished as gold needs legal backing to become money. This fact resonated even to Ernst & Young, in a study commissioned in 1990 by the Association for the Monetary Union of Europe (AMUE). Therein, they were clear and unequivocal, that businesses wanted the ECU, the Euro's precursor, to have state sponsorship for them to accept it as currency.

So the Ben Bernanke of six months earlier had his revenge, even if he didn't seem to realize it. His own reply about gold was uttered by the very lips of his archnemesis!

So what should have Ben Bernanke replied in the first place to settle the matter and avoid the embarassment, at least if he is such a good historian as he claims to be? Maybe something along these lines:

As we speak, gold is not money in this country. This is what the law currently says.

In specific times and in specific places, yes, gold was money, whenever and wherever laws established it as such. But not by virtue of some immutable "economic law".

In that sense, gold money is also fiat.

Note: This is by no means meant as a general critique on Ron Paul, whom the author views as an honest and principled politician and accepts his views on a host of other issues. It is, however, a critique on what the author perceives as an unfounded fixation on the monetary destiny of precious metals.