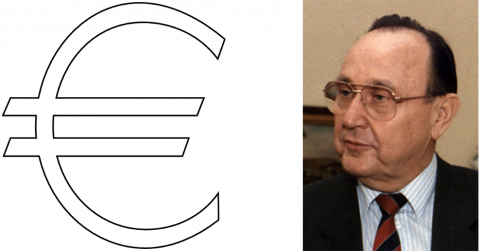 [Note: The original text in German has been republished here]

I. The need for further progress in developing the EMS

1. The creation of a single European monetary area with a European Central Bank is an economically necessary supplement to the European single market.

It is also the catalyst for the necessary convergence of economic policies in the Member States, without which monetary union can not exist.

2. The monetary turbulence of recent months and the internationalization of financial markets underline the need for further progress in developing the EMS.

It is in the interest of all EMS Member States to reduce their dependency on the dollar and strengthen their ability to take monetary policy action by creating a single European monetary area.

The international monetary system will be strengthened overall by the creation of a stable European currency bloc and the maintenance of equilibrium exchange rates to third currencies will be facilitated.

II. Conditions for the creation of a single currency area:

A permanent union of the Member States of the EMS into a single currency area presupposes that the parties agree in their basic political views. This includes the degree of autonomy of a European Central Bank.

Because of the link between central bank autonomy and monetary stability, a high degree of personal and functional autonomy of a European Central Bank is necessary both vis-à-vis national and community institutions. The influence of national and Community political institutions on the appointment and dismissal of central bank governors and on the implementation of the monetary policy of a European Central Bank must be well defined and strictly limited.

From the point of view of monetary stability, financial autonomy is particularly important: the two circuits - creation of money (by the central bank) and financing of public expenditure (by the Community or the governments) - must remain strictly separate. A European Central Bank may not be required to finance national or Community budget deficits.

A European Central Bank must give priority in its monetary policy to the objective of monetary stability. This means that all partner countries, in close coordination, must pursue policies that contribute to the stability of domestic prices and costs and to external balance as a prerequisite for lasting exchange rate stability.

On the one hand, the Federal Government is required by the Stability Act to observe the requirements of macroeconomic balance in its economic and fiscal policy measures. The components of the equilibrium are the stability of the price level, a high level of employment and external equilibrium with adequate and steady growth.

On the other hand, the Bundesbank is required by the Bundesbank Act to secure the currency and, at the same time, to support general economic policy in compliance with this task. It is important that the Bundesbank is not obliged to grant central bank loans to the public sector. It can not be used to cover budget deficits.

Both elements, the government's commitment to a comprehensive stability policy as well as the independence of the Bundesbank in securing currency stability support each other.

The basic elements of the Bundesbank Act and the objectives of the Law for Promoting Economic Stability and Growth are to form the basis of a European Magna Carta of stability policy.

There is a close link between Economic and Monetary Union. The tension can only be resolved by parallel progress in both areas.

Monetary and monetary policy should not be torn from the linkage with fiscal and other economic policies. Money supply and demand for money, especially from public authorities, must be closely coordinated. This assumes that u. a. Consensus on the basic objectives opens up rather money and income policy exists.

Preparing to set up a European Central Bank involves making a decision about the future currency. Among the possible alternatives, the use of the ECU should initially have the greatest chance of realization, first as a parallel and later as a common currency. Their previous use, however, is still low, not least because of their basket construction, the exchange rate fluctuations last. The creation of a European Central Bank and recognition of the ECU as a legal tender would make it more attractive and could become the common European currency after a transitional period of several years. During the transitional period, intensive use should be made of the use of the ECU in the private and public sectors.

It is desirable to involve all EMS Member States in a European Central Bank from the beginning.

The prerequisite for this would be that all of them now submit to the same rules in the system (accession of GB, GR, SP, P to the exchange rate mechanism, equal bandwidths for all, abandonment of the split foreign exchange market by B).

If some Member States are currently unwilling to comply with the general rules of the EMS, they may later join the (then further developed) system.

III. The next steps

At the European Council in Hanover on 27-28 June 1988 should send a signal for the creation of a European monetary area and a European Central Bank.

The European Council should set up a panel of "5-7 wise men" and commission it to develop, within a year, principles for the development of a European monetary area and to draft a statute for the establishment of a European Central Bank and to present a blueprint for the measures to be taken during the transitional period. The members of the panel should have professional and political authority and be independent.

2. Mandate draft for the European Council

The panel of experts should be guided in its work by the principles of the Bundesbank Act and the Law for Promoting Stability and Growth of the Economy.

Experts should submit their proposals within one year.

The euro: opportunity for the German industry. Report of the EMU Industry Forum (1996)