How we came to know about the iron obols, the antecedents of the drachma 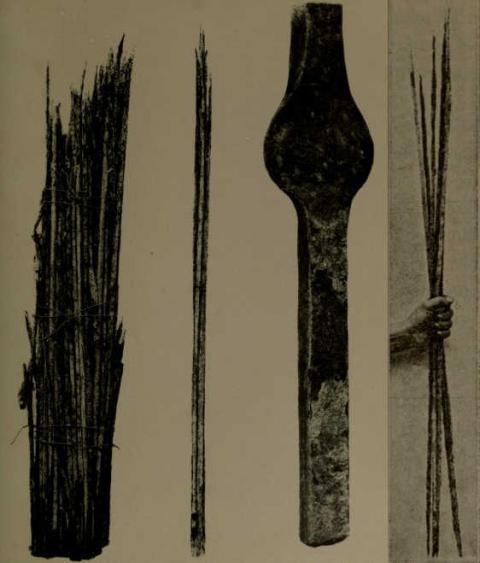 Almost every lay description about ancient coinage makes a reference to ancient Greece and contains a description about the "obols", or "obels", or "obelisks" (οβολοί, οβελοί, οβελίσκοι) i.e. the iron spits a handful of which made up the "drachma" (about the etymology of the word see here). Abiding by scientific standards, for many centuries the obols were nothing more than a story. How did that story actually become fact?

The obols were mentioned in several ancient and hellenistic texts that were transmitted to us by Byzantine scribes and scholars.

E.g., the Etymologicum Magnum of an unknown Byzantine lexicographer of the 12th or 13th century tells us under the heading "οβελίσκος" (my translation):

First among all people, Pheidon of Argos minted coinage in Aegina; and having withrdrawn the obelisks (spits) in favor of the coin, he offered them to Hera of Argos. And because at the time the obelisks filled the hand, i.e. the fist [δράκα], even if six obols do not fill the fist, we still call that a drachma, from the verb ''to hold'' [δράξασθαι].

This is an almost verbatim rendering of a text in the Etymologicum of Orion of Thebes, a grammarian of the 5th century A.D., which in turn refers to a text of Heraclides Ponticus (though there is a debate as to whether this was the older Heraclides Ponticus, philisopher and astronomer who lived during the 4th century BC and studied under Plato, or the younger who lived during the 1st century AD and studied under Didymus).

There are many other accounts of Pheidon of Argos and his development of coinage and measures. But whatever those texts tell us, how do we know that something like an iron spit actually existed and was the forerunner to ancient Greek coinage? How can we discern between fact and myth? How do we know that our current understandings are not simply Mengerian exercises in praxeology, in other words pure conjecture?

In 1892 the American School of Classical Studies at Athens started excavating at the Heraeum of Argos. This was the place where those texts said that Pheidon, a figure lost in the depths of Greek history, offered the iron obelisks. The excavations brought to light innumerable bronze pins, either nail-shaped or twisted like pretzels, which Charles Waldstein, director of the excavations, thought to be spits. He was convinced that they had some sort of monetary value and that they were offerings to the goddess Hera. But the most startling discovery was the following:1

Finally, in the northeast end of the Second Temple platform we were much astonished to find two huge objects of iron (Fig. 31). The one was greeted by our workmen with the call of "a cannon," for it certainly was of the dimensions and weight of a field-gun. The other, slightly smaller, was a solid mass of iron, a square bar flattened out into a lance-shaped curve, of which the point has been flattened down. The cannon-shaped iron mass was found to consist of innumerable rounded bars of metal coming to a point and held together at either end by an iron coil tightly twisted round them, so that they all presented one mass. If it had belonged to Roman times, one would have called it a huge iron rendering of the lie tor''s staffs.

This iron mass had a sorry fate, albeit with a happy ending, recounted by the director of the Numismatic Museum of Athens, Ioannis Svoronos (my translation):2

Unfortunately, although Ch. Waldstein immediately recognized the importance of his discovery, after being transferred to Athens, this band of spits was considered insignificant and, without even being recorded in the books of the National Archaeological Museum, was destroyed. Most of the obols were crushed to small pieces and thrown in the basements of the Museum, where the humidity, freely operating for twelve years, exacerbated the destruction. Fortunately, one of my former students in the lessons of primitive coins, curator of antiquities Mr. K. Kourouniotis, remembered that iron obols were once transferred from the Heraeum to Athens. With his help, and with that of the current director of the National Archaeological Museum, Mr. V. Stais, we discovered them in the basements of the museum. Through joint action with Mr. Stais, the Ministry ordered their immediate transfer and placement with the National Numismatics Museum, where we are now busy with taking every precaution to stop any further damage. Then, after we reunite them in a band of the original shape, with the help of the picture published by Mr. Waldstein, we intend to display them in a glass show case as one of the most sacred treasures of the Numismatic Museum. Because the discovery of the offerring of the man that introduced silver coinage, King Pheidon, in memory of the most ancient coin is by no means a small thing!

Today, six of these spits are exhibited at the Numismatic Museum at Athens:

According to the tests carried out by Svoronos, the length of the best preserved of these spits was ca. 120 cm and their weight ca. 400 g. Their base was rectangular and their edge was pointed, as was fitting for actual spits.

So, there you have it: hypothesis, empirical observation, verification. The scientific method at its best, even if we are not talking about exact science!

Maybe this little story can serve as a lesson in methodology to economists posing as historians, and to economic theorists refuting the applicability of the scientific method in their endeavors. The only problem of this method is that is requires back-breaking effort to actually find the empirical evidence, thus making it distinctly unsuitable for the lazy.

All in all, the dimensions of these iron spits were suitable to actually use them for roasting meat over the fire. This is another point in favour of the religious origins of money, as suggested by Bernhard Laum. As Alla Semenova pointed out recently, an "obol" might be an actual meat ration from a sacrificial animal, redistributed to the community after the sacrifice.3 According to this interpretation, the clergy - i.e. the state - was responsible for setting values and creating a standard for their measurement. This measure of value was not intended for carrying out trade and exchanging goods for profit. In that particular case its purpose was to facilitate the payment of sacred debts to the gods and the redistribution of wealth within the community.

Obols and the "Weight Standard"

The "weight standard" in the above pictures is an iron griddle for cooking fried flat bread over coals (the back smooth side), the griddle was then inverted (split-ridged side up: shown) the flat bread was placed on the ridge and the meat/veggies was slid off the oboli onto to flat bread and folded over. Pictured above is the original fast food joint. Obols are used to pay your helots for a days work or three obols of meat for a prostitute; not unlike prior to the US / Panama invasion, when local prostitutes bartered for a bucket of KFC chicken. Also the long heavy handle on the griddle is to facilitate a counter balance and stable base needed to cook.
Thanks for your article, I've been researching Obol utensil money as a possible future "barter currency" in a economic crash situation. The obols also make a good small game hunting weapon; my "obols" are made from 1 mm round iron rebar about one cubic long (82 cm), cleaned, oiled, and sharpened. And six do make a drachum.
Thanks again