No example of a barter economy, pure and simple, has ever been described, let alone the emergence from it of money; all available ethnography suggests that there never has been such a thing Caroline Humphrey, Barter and Economic Disintegration (1985) 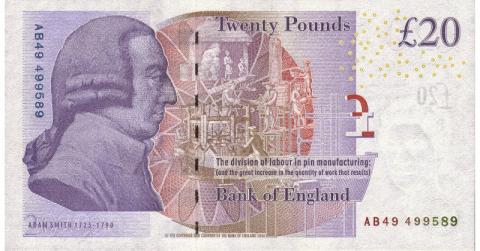 Adam Smith is considered the spiritual father of such principles as "freedom from state intervention". Quotes such as this make for this reputation:

It is thus that every system which endeavours, either, by extraordinary encouragements to draw towards a particular species of industry a greater share of the capital of the society than what would naturally go to it, or, by extraordinary restraints, to force from a particular species of industry some share of the capital which would otherwise be employed in it, is, in reality, subversive of the great purpose which it means to promote. It retards, instead of accelerating the progress of the society towards real wealth and greatness; and diminishes, instead of increasing, the real value of the annual produce of its land and labour.

Throughout his text he doesn't fail to condemn government and kings as profligate and useless, focusing on the private sector as the productive force of society. However, he is neither a laissez-faire extremist, nor a free-market fundamentalist as his modern disciples would paint him; he does see a role for the state in an economy and a society.

All systems, either of preference or of restraint, therefore, being thus completely taken away, the obvious and simple system of natural liberty establishes itself of its own accord. Every man, as long as he does not violate the laws of justice, is left perfectly free to pursue his own interest his own way, and to bring both his industry and capital into competition with those of any other man, or order of men [...] According to the system of natural liberty, the sovereign has only three duties to attend to; three duties of great importance, indeed, but plain and intelligible to common understandings: first, the duty of protecting the society from the violence and invasion of other independent societies; secondly, the duty of protecting, as far as possible, every member of the society from the injustice or oppression of every other member of it, or the duty of establishing an exact administration of justice; and, thirdly, the duty of erecting and maintaining certain public works, and certain public institutions, which it can never be for the interest of any individual, or small number of individuals to erect and maintain; because the profit could never repay the expense to any individual, or small number of individuals, though it may frequently do much more than repay it to a great society.

Even under that limited framework, Adam Smith is a raving-mad statist, opening the floodgates of Soviet-style central planning, at least according to Austrian economists and modern neoliberal standards. One would think... Actually, this is their indictment against him only regarding the third pillar of his proposals. As in everything in life, there are gradations.

Clearly, not all of Adam Smith's ideas are equally accepted – or rejected – by free-marketeers and there might be a good reason for that.

This is the essence of Adam Smith's justification of civil government with a justice system: the protection of the private property of the richest people:

Wherever there is a great property, there is great inequality. For one very rich man, there must be at least five hundred poor, and the affluence of the few supposes the indigence of the many. [...] He is at all times surrounded by unknown enemies, whom, though he never provoked, he can never appease, and from whose injustice he can be protected only by the powerful arm of the civil magistrate, continually held up to chastise it. The acquisition of valuable and extensive property, therefore, necessarily requires the establishment of civil government. Where there is no property, or at least none that exceeds the value of two or three days labour, civil government is not so necessary.

Anarchocapitalists are seeimingly more self-consistent in their policy proposals. In contrast, Adam Smith wanted the protection of the rich people's property spending other people's money: using the state and socializing the costs in the process. What a state socialist!

The state is a better manager than the private sector

Now, what happens after a public infrastructure project has been constructed and is up and running?

The tolls for the maintenance of a highroad cannot, with any safety, be made the property of private persons. A high-road, though entirely neglected, does not become altogether impassable, though a canal does. The proprietors of the tolls upon a high-road, therefore, might neglect altogether the repair of the road, and yet continue to levy very nearly the same tolls. It is proper, therefore, that the tolls for the maintenance of such a work should be put under the management of commissioners or trustees. [...] If mean and improper persons are frequently appointed trustees;...the recency of the institution both accounts and apologizes for those defects, of which, by the wisdom of parliament, the greater part may, in due time, be gradually remedied.

Now this is really heretic, if we accept that a prophet can commit heresy. The whole concept behind privatisations and public-private partnerships (PPPs) is that the private sector is a better manager and a more efficient allocator of resources. Smith's approach is that private managers of such infrastructures will levy the maximum profits while spending the minimum in maintenance. Only through the "wisdom of the parliament" can this neglect be remedied.

The state should organise public education at the elementary (reading, writing, arithmetic) and technical (geometry, mechanics) levels for the children of poorer families. It should make it compulsory and partially subsidise it:

But though the common people cannot, in any civilized society, be so well instructed as people of some rank and fortune; the most essential parts of education, however, to read, write, and account, can be acquired at so early a period of life, that the greater part, even of those who are to be bred to the lowest occupations, have time to acquire them before they can be employed in those occupations.[...] The public can facilitate this acquisition, by establishing in every parish or district a little school, where children maybe taught for a reward so moderate, that even a common labourer may afford it; the master being partly, but not wholly, paid by the public; because, if he was wholly, or even principally, paid by it, he would soon learn to neglect his business. [...] If, in those little schools, the books by which the children are taught to read, were a little more instructive than they commonly are; and if, instead of a little smattering in Latin, which the children of the common people are sometimes taught there, and which can scarce ever be of any use to them, they were instructed in the elementary parts of geometry and mechanics; the literary education of this rank of people would, perhaps, be as complete as can be. There is scarce a common trade, which does not afford some opportunities of applying to it the principles of geometry and mechanics, and which would not, therefore, gradually exercise and improve the common people in those principles, the necessary introduction to the most sublime, as well as to the most useful sciences.

The public can impose upon almost the whole body of the people the necessity of acquiring the most essential parts of education, by obliging every man to undergo an examination or probation in them, before he can obtain the freedom in any corporation, or be allowed to set up any trade, either in a village or town corporate.

As far as higher education is concerned, Adam Smith the educator already told us that they should be privately taught and that the Professors should get no tenure or permanent paycheck.

So, thus far the list of acceptable state intervention in public affairs and the economy is:

OK, that was short!