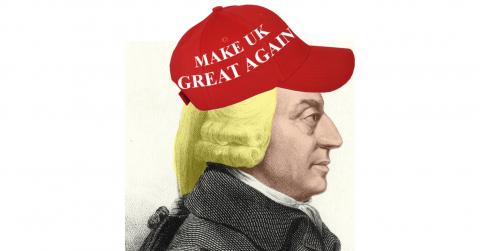 It is the maxim of every prudent master of a family, never to attempt to make at home what it will cost him more to make than to buy. The tailor does not attempt to make his own shoes, but buys them of the shoemaker. The shoemaker does not attempt to make his own clothes, but employs a tailor. The farmer attempts to make neither the one nor the other, but employs those different artificers [...] The natural advantages which one country has over another, in producing particular commodities, are sometimes so great, that it is acknowledged by all the world to be in vain to struggle with them. Adam Smith, Wealth of Nations (BOOK IV, CHAPTER II, p. 486-487)

There seem, however, to be two cases, in which it will generally be advantageous to lay some burden upon foreign, for the encouragement of domestic industry. The first is, when some particular sort of industry is necessary for the defence of the country. Adam Smith, Wealth of Nations (BOOK IV, CHAPTER II, p. 492)

If any particular manufacture was necessary, indeed, for the defence of the society, it might not always be prudent to depend upon our neighbours for the supply; and if such manufacture could not otherwise be supported at home, it might not be unreasonable that all the other branches of industry should be taxed in order to support it. The bounties upon the exportation of British made sail-cloth, and British made gunpowder, may, perhaps, both be vindicated upon this principle. Adam Smith, Wealth of Nations (BOOK IV, CHAPTER V, p. 559)

The second case, in which it will generally be advantageous to lay some burden upon foreign for the encouragement of domestic industry, is when some tax is imposed at home upon the produce of the latter. Adam Smith, Wealth of Nations (BOOK IV, CHAPTER II, p. 494)

Premiums given by the public to artists and manufacturers, who excel in their particular occupations, are not liable to the same objections as bounties. By encouraging extraordinary dexterity and ingenuity, they serve to keep up the emulation of the workmen actually employed in those respective occupations [...] Their tendency is not to overturn the natural balance of employments, but to render the work which is done in each as perfect and complete as possible. Adam Smith, Wealth of Nations (BOOK IV, CHAPTER V, p. 560)

When a company of merchants undertake, at their own risk and expense, to establish a new trade with some remote and barbarous nation, it may not be unreasonable to incorporate them into a joint-stock company, and to grant them, in case of their success, a monopoly of the trade for a certain number of years. It is the easiest and most natural way in which the state can recompense them for hazarding a dangerous and expensive experiment, of which the public is afterwards to reap the benefit. A temporary monopoly of this kind may be vindicated, upon the same principles upon which a like monopoly of a new machine is granted to its inventor, and that of a new book to its author. But upon the expiration of the term, the monopoly ought certainly to determine; the forts and garrisons, if it was found necessary to establish any, to be taken into the hands of government, their value to be paid to the company, and the trade to be laid open to all the subjects of the state. By a perpetual monopoly, all the other subjects of the state are taxed very absurdly [...] Without a monopoly, however, a joint-stock company, it would appear from experience, cannot long carry on any branch of foreign trade. Adam Smith, Wealth of Nations (BOOK V, CHAPTER I, p. 814)

The case in which it may sometimes be a matter of deliberation how far it is proper to continue the free importation of certain foreign goods, is when some foreign nation restrains, by high duties or prohibitions, the importation of some of our manufactures into their country. Revenge, in this case, naturally dictates retaliation, and that we should impose the like duties and prohibitions upon the importation of some or all of their manufactures into ours. Adam Smith, Wealth of Nations (BOOK IV, CHAPTER I, p. 497)

The very bad policy of one country may thus render it in some measure dangerous and imprudent to establish what would otherwise be the best policy in another [...] In a Swiss canton, or in some of the little states of Italy, it may, perhaps, sometimes be necessary to restrain the exportation of corn...To hinder, besides, the farmer from sending his goods to all times to the best market, [...] an act of legislative authority [...] which can be pardoned only in cases of the most urgent necessity [...] The laws concerning corn may everywhere be compared to the laws concerning religion. The people feel themselves so much interested in what relates either to their subsistence in this life, or to their happiness in a life to come, that government must yield to their prejudices, and, in order to preserve the public tranquillity, establish that system which they approve of. It is upon this account, perhaps, that we so seldom find a reasonable system established with regard to either of those two capital objects. Adam Smith, Wealth of Nations (BOOK IV, CHAPTER V, p. 580)

Humanity may in this case require that the freedom of trade should be restored only by slow gradations, and with a good deal of reserve and circumspection. Were those high duties and prohibitions taken away all at once, cheaper foreign goods of the same kind might be poured so fast into the home market, as to deprive all at once many thousands of our people of their ordinary employment and means of subsistence. Adam Smith, Wealth of Nations (BOOK IV, CHAPTER I, p. 499)

To open the colony trade all at once to all nations, might not only occasion some transitory inconveniency, but a great permanent loss, to the greater part of those whose industry or capital is at present engaged in it. Adam Smith, Wealth of Nations (BOOK IV, CHAPTER VII, p. 655)

[B]ut our spinners are poor people, women commonly, scattered about in all different parts of the sale of their work, without support or protection. It is not by the sale of their work, but by that of the complete work of the weavers, that our greater master manufacturers make their profits [...] By encouraging the importation of foreign linen yarn, and thereby bringing it into competition with that which is made by our own people, they endeavor to buy the work of the poor spinners as cheap as possible [...] It is the industry which is carried on the benefit of the rich and the powerful, that is principally encouraged be our mercantile system, that which is carried on for the benefit of the poor and the indigent, is too often, either neglected, or oppressed. Adam Smith, Wealth of Nations (BOOK IV, CHAPTER VIII, p. 696-697)

To expect, indeed, that the freedom of trade should ever be entirely restored in Great Britain, is as absurd as to expect that an Oceana or Utopia should ever be established in it. Not only the prejudices of the public, but, what is much more unconquerable, the private interests of many individuals, irresistibly oppose it. Were the officers of the army to oppose, with the same zeal and unanimity, any reduction in the number of forces, with which master manufacturers set themselves against every law that is likely to increase the number of their rivals in the home market; were the former to animate their soldiers. In the same manner as the latter inflame their workmen, to attack with violence and outrage the proposers of any such regulation; to attempt to reduce the army would be as dangerous as it has now become to attempt to diminish, in any respect, the monopoly which our manufacturers have obtained against us. This monopoly has so much increased the number of some particular tribes of them, that, like an overgrown standing army, they have become formidable to the government, and, upon many occasions, intimidate the legislature. The member of parliament who supports every proposal for strengthening this monopoly, is sure to acquire not only the reputation of understanding trade, but great popularity and influence with an order of men whose numbers and wealth render them of great importance. If he opposes them, on the contrary, and still more, if he has authority enough to be able to thwart them, neither the most acknowledged probity, nor the highest rank, nor the greatest public services, can protect him from the most infamous abuse and detraction, from personal insults, nor sometimes from real danger, arising from the insolent outrage of furious and disappointed monopolists. Adam Smith, Wealth of Nations (BOOK IV, CHAPTER I, p. 501)