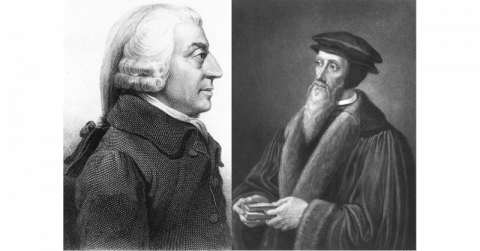 In the colonies of all those three nations [Spain, Portugal, France], too, the ecclesiastical government is extremely oppressive. Tithes take place in all of them, and are levied with the utmost rigour in those of Spain and Portugal. All of them, besides, are oppressed with a numerous race of mendicant friars, whose beggary being not only licensed but consecrated by religion, is a most grievous tax upon the poor people, who are most carefully taught that it is a duty to give, and a very great sin to refuse them their charity. Over and above all this, the clergy are, in all of them, the greatest engrossers of land. Adam Smith, Wealth of Nations (BOOK IV, CHAPTER VII, p. 620)

Times of violent religious controversy have generally been times of equally violent political faction. Upon such occasions, each political party has either found it, or imagined it, for his interest, to league itself with some one or other of the contending religious sects. But this could be done only by adopting, or, at least, by favouring the tenets of that particular sect. The sect which had the good fortune to be leagued with the conquering party necessarily shared in the victory of its ally, by whose favour and protection it was soon enabled, in some degree, to silence and subdue all its adversaries [...] But if politics had never called in the aid of religion, had the conquering party never adopted the tenets of one sect more than those of another, when it had gained the victory, it would probably have dealt equally and impartially with all the different sects, and have allowed every man to choose his own priest, and his own religion, as he thought proper. There would, and, in this case, no doubt, have been, a great multitude of religious sects [...] The interested and active zeal of religious teachers can be dangerous and troublesome only where there is either but one sect tolerated in the society, or where the whole of a large society is divided into two or three great sects; the teachers of each acting by concert, and under a regular discipline and subordination. But that zeal must be altogether innocent, where the society is divided into two or three hundred, or, perhaps, into as many thousand small sects, of which no one could be considerable enough to disturb the public tranquillity [...] The teachers of each little sect, finding themselves almost alone, would be obliged to respect those of almost every other sect; and the concessions which they would mutually find in both convenient and agreeable to make one to another, might in time, probably reduce the doctrine of the greater part of them to that pure and rational religion, free from every mixture of absurdity, imposture, or fanaticism, such as wise men have, in all ages of the world, wished to see established; Adam Smith, Wealth of Nations (BOOK V, CHAPTER I, p. 850-852)

Science is the great antidote to the poison of enthusiasm and superstition; and where all the superior ranks of people were secured from it, the inferior ranks could not be much exposed to it. Adam Smith, Wealth of Nations (BOOK V, CHAPTER I, p. 855)

The clergy of every established church constitute a great incorporation [...] Their interest as an incorporated body is never the same with that of the sovereign, and is sometimes directly opposite to it [...] But there is no order of men, it appears I believe, from the experience of all ages, upon whom it is so dangerous or rather so perfectly ruinous, to employ force and violence, as upon the respected clergy of an established church. The rights, the privileges, the personal liberty of every individual ecclesiastic, who is upon good terms with his own order, are, even in the most despotic governments, more respected than those of any other person of nearly equal rank and fortune. It is so in every gradation of despotism, from that of the gentle and mild government of Paris, to that of the violent and furious government of Constantinople. Adam Smith, Wealth of Nations (BOOK V, CHAPTER I, p. 856-858)

In the church of Rome the industry and zeal of the inferior clergy are kept more alive by the powerful motive of self-interest, than perhaps in any established protestant church. The parochial clergy derive many of them, a very considerable part of their subsistence from the voluntary oblations of the people; a source of revenue, which confession gives them many opportunities of improving. The mendicant orders derive their whole subsistence from such oblations. It is with them as with the hussars and light infantry of some armies; no plunder, no pay. Adam Smith, Wealth of Nations (BOOK V, CHAPTER III, p. 848)

[T]hrough the greater part of Europe, during the tenth, eleventh, twelfth, and thirteenth centuries, and for some time both before and after that period, the constitution of the church of Rome may be considered as the most formidable combination that ever was formed against the authority and security of civil government, as well as against the liberty, reason, and happiness of mankind, which can flourish only where civil government is able to protect them. In that constitution, the grossest delusions of superstition were supported in such a manner by the private interests of so great a number of people, as put them out of all danger from any assault of human reason; because, though human reason might, perhaps, have been able to unveil, even to the eyes of the common people, some of the delusions of superstition, it could never have dissolved the ties of private interest. Had this constitution been attacked by no other enemies but the feeble efforts of human reason, it must have endured for ever. But that immense and well-built fabric, which all the wisdom and virtue of man could never have shaken, much less have overturned, was, by the natural course of things, first weakened, and afterwards in part destroyed; and is now likely, in the course of a few centuries more, perhaps, to crumble into ruins altogether. Adam Smith, Wealth of Nations (BOOK V, CHAPTER III, p. 861)

The followers of Luther, together with what is called the church of England, preserved more or less of the episcopal government, established subordination among the clergy, gave the sovereign the disposal of all the bishoprics, and other consistorial benefices within his dominions, and thereby rendered him the real head of the church; [...] Under such a government, the clergy naturally endeavour to recommend themselves to the sovereign, to the court, and to the nobility and gentry of the country, by whose influence they chiefly expect to obtain preferment. They pay court to those patrons, sometimes, no doubt, by the vilest flattery and assentation; but frequently, too, by cultivating all those arts which best deserve, and which are therefore most likely to gain them, the esteem of people of rank and fortune;Adam Smith, Wealth of Nations (BOOK V, CHAPTER III, p. 867-868)

The followers of Zuinglius, or more properly those of Calvin, on the contrary, bestowed upon the people of each parish, whenever the church became vacant, the right of electing their own pastor; and established, at the same time, the most perfect equality among the clergy. The former part of this institution, as long as it remained in vigour, seems to have been productive of nothing but disorder and confusion, and to have tended equally to corrupt the morals both of the clergy and of the people. The latter part seems never to have had any effects but what were perfectly agreeable [...] There is scarce, perhaps, to be found anywhere in Europe, a more learned, decent, independent, and respectable set of men, than the greater part of the presbyterian clergy of Holland, Geneva, Switzerland, and Scotland [...] The presbyterian clergy, accordingly, have more influence over the minds of the common people, than perhaps the clergy of any other established church. It is, accordingly, in presbyterian countries only, that we ever find the common people converted, without persecution completely, and almost to a man, to the established church. Adam Smith, Wealth of Nations (BOOK V, CHAPTER III, p. 868-871)

In several protestant countries, particularly in all the protestant cantons of Switzerland, the revenue which anciently belonged to the Roman catholic church, the tithes and church lands, has been found a fund sufficient, not only to afford competent salaries to the established clergy, but to defray, with little or no addition, all the other expenses of the state. The magistrates of the powerful canton of Berne, in particular, have accumulated, out of the savings from this fund, a very large sum, supposed to amount to several millions; part or which is deposited in a public treasure, and part is placed at interest in what are called the public funds of the different indebted nations of Europe; chiefly in those of France and Great Britain.
Adam Smith, Wealth of Nations (BOOK V, CHAPTER III, p. 873)