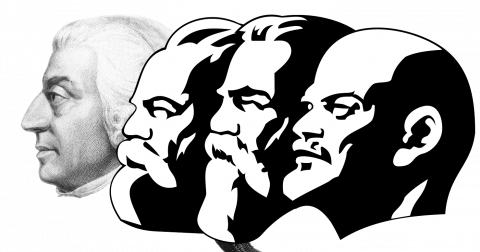 Our merchants and master manufacturers complain much of the bad effects of high wages in raising the price, and thereby lessening the sale of their goods, both at home and abroad. They say nothing concerning the bad effects of high profits; they are silent with regard to the pernicious effects of their own gains; they complain only of those of other people. Adam Smith, Wealth of Nations (BOOK II, CHAPTER IX, p. 113)

People of the same trade seldom meet together, even for merriment and diversion, but the conversation ends in a conspiracy against the public, or in some contrivance to raise prices. Adam Smith, Wealth of Nations (BOOK II, CHAPTER IX, p. 148)

Country gentlemen and farmers are, to their great honour, of all people, the least subject to the wretched spirit of monopoly. The undertaker of a great manufactory is sometimes alarmed if another work of the same kind is established within twenty miles of him; the Dutch undertaker of the woollen manufacture at Abbeville, stipulated that no work of the same kind should be established within thirty leagues of that city. Farmers and country gentlemen, on the contrary, are generally disposed rather to promote, than to obstruct, the cultivation and improvement of their neighbours farms and estates. They have no secrets, such as those of the greater part of manufacturers, but are generally rather fond of communicating to their neighbours, and of extending as far as possible any new practice which they may have found to be advantageous. "Pius quaestus", says old Cato, "stabilissimusque, minimeque invidiosus; minimeque male cogitantes sunt, qui in eo studio occupati sunt." Country gentlemen and farmers, dispersed in different parts of the country, cannot so easily combine as merchants and manufacturers, who being collected into towns, and accustomed to that exclusive corporation spirit which prevails in them, naturally endeavour to obtain, against all their countrymen, the same exclusive privilege which they generally possess against the inhabitants of their respective towns. Adam Smith, Wealth of Nations (BOOK IV, CHAPTER II, p. 490-491)

The capricious ambition of kings and ministers has not, during the present and the preceding century, been more fatal to the repose of Europe, than the impertinent jealousy of merchants and manufacturers. The violence and injustice of the rulers of mankind is an ancient evil, for which, I am afraid, the nature of human affairs can scarce admit of a remedy: but the mean rapacity, the monopolizing spirit, of merchants and manufacturers, who neither are, nor ought to be, the rulers of mankind, though it cannot, perhaps, be corrected, may very easily be prevented from disturbing the tranquillity of anybody but themselves. Adam Smith, Wealth of Nations (BOOK IV, CHAPTER III, p. 526-527)

The government of an exclusive company of merchants is, perhaps, the worst of all governments for any country whatever.[...] The French colony of Canada was, during the greater part of the last century, and some part of the present, under the government of an exclusive company. Under so unfavourable an administration, its progress was necessarily very slow, in comparison with that of other new colonies; but it became much more rapid when this company was dissolved, after the fall of what is called the Mississippi scheme. Adam Smith, Wealth of Nations (BOOK IV, CHAPTER VII, PART II, p. 615-616)

To promote the little interest of one little order of men in one country, it hurts the interest of all other orders of men in that country, and of all men in all other countries.[...] It is thus the single advantage which the monopoly procures to a single order of men, is in many different ways hurtful to the general interest of the country. To found a great empire for the sole purpose of raising up a people of customers, may at first sight appear a project fit only for a nation of shopkeepers; It is, however, a project altogether unfit for a nation of shopkeepers; but extremely fit for a nation whose government is influenced by shopkeepers. Adam Smith, Wealth of Nations (BOOK IV, CHAPTER VII, PART III, p. 622-623)

When a company of merchants undertake, at their own risk and expense, to establish a new trade with some remote and barbarous nation, it may not be unreasonable to incorporate them into a joint-stock company, and to grant them, in case of their success, a monopoly of the trade for a certain number of years. It is the easiest and most natural way in which the state can recompense them for hazarding a dangerous and expensive experiment, of which the public is afterwards to reap the benefit. A temporary monopoly of this kind may be vindicated, upon the same principles upon which a like monopoly of a new machine is granted to its inventor, and that of a new book to its author. But upon the expiration of the term, the monopoly ought certainly to determine; the forts and garrisons, if it was found necessary to establish any, to be taken into the hands of government, their value to be paid to the company, and the trade to be laid open to all the subjects of the state. By a perpetual monopoly, all the other subjects of the state are taxed very absurdly...Without a monopoly, however, a joint-stock company, it would appear from experience, cannot long carry on any branch of foreign trade. Adam Smith, Wealth of Nations (BOOK V, CHAPTER I, PART III, p. 814)

...but our spinners are poor people, women commonly, scattered about in all different parts of the sale of their work, without support or protection. It is not by the sale of their work, but by that of the complete work of the weavers, that our greater master manufacturers make their profits...By encouraging the importation of foreign linen yarn, and thereby bringing it into competition with that which is made by our own people, they endeavor to buy the work of the poor spinners as cheap as possible.[...] It is the industry which is carried on the benefit of the rich and the powerful, that is principally encouraged be our mercantile system, that which is carried on for the benefit of the poor and the indigent, is too often, either neglected, or oppressed Adam Smith, Wealth of Nations (BOOK IV, CHAPTER VIII, p. 696-697)

The whole annual produce of the land and labour of every country, or, what comes to the same thing, the whole price of that annual produce, naturally divides itself, it has already been observed, into three parts; the rent of land, the wages of labour, and the profits of stock; and constitutes a revenue to three different orders of people; to those who live by rent, to those who live by wages, and to those who live by profit. These are the three great, original, and constituent, orders of every civilized society, from whose revenue that of every other order is ultimately derived. Adam Smith, Wealth of Nations (BOOK I, CHAPTER XI, PART III, p. 285)

[The proprietors of land] are, indeed, too often defective in this tolerable knowledge [of their own interest]. They are the only one of the three orders whose revenue costs them neither labour nor care, but comes to them, as it were, of its own accord, and independent of any plan or project of their own. That indolence which is the natural effect of the ease and security of their situation, renders them too often, not only ignorant, but incapable of that application of mind, which is necessary in order to foresee and understand the consequence of any public regulation. Adam Smith, Wealth of Nations (BOOK I, CHAPTER XI, p. 286)

But though the interest of the labourer is strictly connected with that of the society, he is incapable either of comprehending that interest, or of understanding its connexion with his own. His condition leaves him no time to receive the necessary information, and his education and habits are commonly such as to render him unfit to judge, even though he was fully informed. In the public deliberations, therefore, his voice is little heard, and less regarded; except upon particular occasions, when his clamour is animated, set on, and supported by his employers, not for his, but their own particular purposes. Adam Smith, Wealth of Nations (BOOK I, CHAPTER XI, p. 286-287)

The interest of this third order, therefore, has not the same connexion with the general interest of the society, as that of the other two. Merchants and master manufacturers are, in this order, the two classes of people who commonly employ the largest capitals [...] As during their whole lives they are engaged in plans and projects, they have frequently more acuteness of understanding than the greater part of country gentlemen. As their thoughts, however, are commonly exercised rather about the interest of their own particular branch of business. than about that of the society, their judgment, even when given with the greatest candour (which it has not been upon every occasion), is much more to be depended upon with regard to the former of those two objects, than with regard to the latter [....] The interest of the dealers, however, in any particular branch of trade or manufactures, is always in some respects different from, and even opposite to, that of the public. To widen the market, and to narrow the competition, is always the interest of the dealers [...]
The proposal of any new law or regulation of commerce which comes from this order, ought always to be listened to with great precaution, ... It comes from an order of men, whose interest is never exactly the same with that of the public, who have generally an interest to deceive and even to oppress the public, and who accordingly have, upon many occasions, both deceived and oppressed it. Adam Smith, Wealth of Nations (BOOK I, CHAPTER XI, p. 287-288)