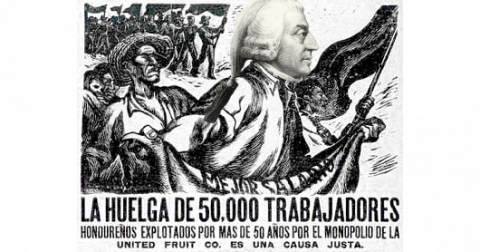 What are the common wages of labour, depends everywhere upon the contract usually made between those two parties, whose interests are by no means the same. The workmen desire to get as much, the masters to give as little, as possible. The former are disposed to combine in order to raise, the latter in order to lower, the wages of labour. It is not, however, difficult to foresee which of the two parties must, upon all ordinary occasions, have the advantage in the dispute, and force the other into a compliance with their terms. The masters, being fewer in number, can combine much more easily: and the law, besides, authorises, or at least does not prohibit, their combinations, while it prohibits those of the workmen. We have no acts of parliament against combining to lower the price of work, but many against combining to raise it. In all such disputes, the masters can hold out much longer. A landlord, a farmer, a master manufacturer, or merchant, though they did not employ a single workman, could generally live a year or two upon the stocks, which they have already acquired. Many workmen could not subsist a week, few could subsist a month, and scarce any a year, without employment. In the long run, the workman may be as necessary to his master as his master is to him; but the necessity is not so immediate. We rarely hear, it has been said, of the combinations of masters, though frequently of those of workmen. But whoever imagines, upon this account, that masters rarely combine, is as ignorant of the world as of the subject. Masters are always and everywhere in a sort of tacit, but constant and uniform, combination, not to raise the wages of labour above their actual rate. To violate this combination is everywhere a most unpopular action, and a sort of reproach to a master among his neighbours and equals. We seldom, indeed, hear of this combination, because it is the usual, and, one may say, the natural state of things, which nobody ever hears of. Masters, too, sometimes enter into particular combinations to sink the wages of labour even below this rate. These are always conducted with the utmost silence and secrecy till the moment of execution; and when the workmen yield, as they sometimes do without resistance, though severely felt by them, they are never heard of by other people. Such combinations, however, are frequently resisted by a contrary defensive combination of the workmen, who sometimes, too, without any provocation of this kind, combine, of their own accord, to raise the price of their labour. Adam Smith, Wealth of Nations (BOOK I, CHAPTER VIII, p. 75-76)

Whenever the legislature attempts to regulate the differences between masters and their workmen, its counsellors are always the masters. When the regulation, therefore, is in favour of the workmen, it is always just and equitable; but it is sometimes otherwise when in favour of the masters. Thus the law which obliges the masters in several different trades to pay their workmen in money, and not in goods, is quite just and equitable... When masters combine together, in order to reduce the wages of their workmen, they commonly enter into a private bond or agreement, not to give more than a certain wage, under a certain penalty. Were the workmen to enter into a contrary combination of the same kind, not to accept of a certain wage, under a certain penalty, the law would punish them very severely; and, if it dealt impartially, it would treat the masters in the same manner. Adam Smith, Wealth of Nations (BOOK I, CHAPTER X, PART II, p. 164)